Nov 6, 2019 | Events to pray for, Flashpoints, INSIGHTS, Prayer Focus for the Nations

When the election date was announced, a friend found herself feeling sad that it was going to take place during Advent, which should be all about Jesus rather than politicians! But Jesus was born during a time of political unrest and, the Roman census, which is not entirely dissimilar to a poll, was going on.

So, as we turn our attention to the seething events of an election campaign driven by highly sophisticated advertising and deliberate deceptions. (I’m thinking of the Tories deliberately doctoring a video to show Sir Keir Starmer stalling at an interview question when, in fact, he didn’t). Perhaps we can seek to fold the nation in prayer, using the words of Philip Brook’s carol: ‘O holy Child of Bethlehem, descend to us, we pray. Cast out our sin and enter in, be born to us today. We hear the Christmas angels the great glad tidings tell; O come to us, abide with us our Lord Emmanuel!’

It was whilst on pilgrimage to the Holy Land in the nineteenth century that this American vicar was inspired by the night view of Bethlehem from the hills of Palestine, to write the words of this much loved carol.

The words are poignant; they set a different tone to those of the vigorous prayer that I have penned for the forthcoming election, but they are a good reminder of who it is we are seeking to honour.

Winston Churchill once said that politicians are asked to stand for parliament because they want to sit in the House of Commons – but they are expected to lie in order to pedal the policies of their particular party. Ouch! And how much more true has that become in our post-truth society?

Lord, in the midst of so much spin, let what is true and of good intent shine out, and policies that are truly worth pursuing.

Let the spirit of discernment come upon the nation to divide between things that are of goodly intent and those which are but siren calls. Let Your ruach breath blow through our land and dispel the noxious fumes that have spread so contaminated the air. As we seek to ‘take to heart all the words that You speak to us,’ may we ‘take words with us and return to You. Forgive all our sins and receive us graciously, that we may offer You the fruit of our lips.’ (Ezek. 3:10; Hos. 14:2)

May we be open to hear words that will heal our inflamed senses and restore damaged trust and relationships.

Bold prayer for the forthcoming Election: Let Your purposes prosper in these post-truth days!

Politicians make their plans and devise many strategies and alliances, but we are asking You to thwart and overthrow that which does not come from You, and to prosper that which does. Determine outcomes so that You may be honoured and exalted in each one of the countries of the United Kingdom.

In Psalm 55, David tells of his grief at seeing ‘violence, strife and destructive forces at work in the city; and many forms of oppression and fraud . . . We too are in a time when we might cry out with him a portion of his prayer that we find in verse 9, offered here in several versions:

‘Destroy their tongues’ / ‘confound their words’ / ‘upset their plans’
or, as TPT puts it, ‘confuse them until they quarrel with themselves.’

Such a prayer is effectively another way of praying, ‘Lord have Your way,’ and ‘In all things overrule!’ When General Galtieri launched his invasion of the Falkland Islands the Lord directed me to pray: ‘Lord, confound Ahithophel’s advice.’ (2 Sam. 15:31) And He did! He made it clear that He was determined to bring down the Argentinian junta on account of all the blood it had shed in the infamous treatment of the many ‘disparados,’ who were tortured and disposed of under its brutal rule. Mercifully we are not at that stage, Lord, but it would certainly make sense to be praying that the Lord confounds the bad advice of certain unrighteous advisers today!

At this time of unparalleled voting volatility, (amongst MPs as well as well as the populace at large!) we recognise Lord that ‘Every kingdom divided against itself will be laid waste, since no city or house divided against itself and splintered by feuding will stand.’ (Matt. 12:25) It is a sure sign of Your judgement, Lord, when You hand us over to strife and division.

There is an inevitable price to pray and division to endure as a result of taking a stand for You, (Matt. 10:32-39) but we are praying, Lord, that Your undivided purposes may prosper. It was You who divided the sea to let Your people escape from Egypt; we intercede now in Jesus’ name that You will part whatever waters need to be parted now so that truth may prosper. 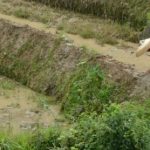