Nov 24, 2021 | Flashpoints, Prayer Focus for the Nations, Watchmen for Russia

At this time of year my thoughts so often turn to Russia. Partly this has stemmed from a long-term awareness of what the Russian people go through as they endure the trials of the winter season, making me eager to pray for informed and fervent faith to rise up in the heart of the land. It is all the more important to do so now, as the leaders of the nation increasingly adopt repressive measures against free elections in their own land, and promote ever more intimidation, disinformation and even outright violence in various places – not least, now, in the shape of a renewed threat to Ukraine.

There is a great deal going on behind the scenes. In reality, the Kremlin’s secret agenda is not as secret as it might try to pretend that it is.

Reports continue to come in of a relentless gathering of Russian forces in a town that would make an ideal base for invading Ukraine, either directly or through Belarus. A great gathering of massed tanks has been spotted, along with something like a hundred thousand troops.

America has been deeply concerned, but uncertain how to respond, wanting neither to appear weak, nor to precipitate actual conflict on behalf of a non-NATO country. They are concerned that if they supply their advanced Javelin anti-tank missiles and Stinger anti-aircraft missiles, that Russia will undoubtedly react strongly declaring this to be provocation and an escalation.

Father, whatever Putin’s precise intentions we ask You to restrain and overrule in all respects – and to guide to the response of President Biden and his team. May diffidence not win the day when clear resolve and action is called for – and may no actions be taken either that would foolishly inflame and escalate an already exceedingly volatile and dangerous situation. Cf UK signs deal to help boost Ukraine’s navy in the face of increased threat from Russia.

We call on You to intervene in power and mercy at this time when Russia is flexing its muscles in readiness, many say, for an armed incursion in either January or February.

Years ago Putin realised that the side that has the advantage in the Info War would have ultimate superiority., and he has gone to great lengths to seek to achieve this. Add to that the advanced armaments Russia has developed, ranging from the conventional to the hypersonic, and we now find it it is flexing its muscles in space as well, having recently shot down one of its own disused satellites. At the lowest level, this makes the already substantial problem of space debris still more acute.

This in turn threatens the development of ‘power stations’ in space – an intriguing prospect which is on the brink of becoming a serious scientific proposition. See this article for example. But then if these stations become vulnerable to missile attack?

Russia and energy supplies are now becoming almost synonymous as part of the whole build up of tension between East and West. We mentioned before that Moldova is again in the Kremlin’s cross hairs, and there have been fresh and disturbing new developments.

Do watch this Prayer Cast for Moldova that we sent out recently.

We recorded this prayer cast for Russia some years ago. It remains current and valid, and provides a ready-made access point for praying for just some of the issues affecting Russia, and its neighbouring nations.

For an insightful glimpse of how the Russian regime is campaigning hard through various digitalised means of propaganda to gain hearts and minds to its cause – not only in countries such as Hungary, but in America too. See this article.

At another level, comes this description from someone who visited a group of Christian ladies a few years ago, who were living in poverty due to their husbands leaving them, and taking all the money with them. What she noticed was that they all idolized President Putin; and that he could do no wrong in their eyes. They had to be careful not to mention anything about him. She was shocked by the terrible conditions that people were living in, in mile after mile of impersonal old flats. It spoke so much to her about the lack of respect for human life.

Compared with Western leaders Putin is a Grandmaster in chess, who delights in making complicated and menacing moves. The West has been slow to face the reality of just how active Russian hostility has been towards it, not least in terms of developing the Arctic, threatening the north of Norway, making Lithuania and the other Baltic states including Finland feel extremely uncomfortable, effectively trying to divert the world’s attention from what is happening in Ukraine by stirring up the Belarusian migrants crisis . . . But chess players do make mistakes . . .

It took exceptional sleuthing on the part of Intelligence Agencies to identify the two Russian agents who carried out the novachok poisonings in Salisbury. Even so, the West is still a long way off the pace.

Russia’s uncritical support for the global vision that China now has, and the joint patrols that it the two countries are operating are not a comforting or a reassuring thought. Can we encourage you to take at least one aspect from this report that strikes you to pray for Russia?

Putin in 2024 and the direction that Russia takes 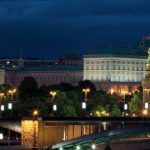 To Russia with love – and further cyber complications