The Host of Heaven (Ruler of the Spheres)

Countless million people declare each week their belief in the ‘communion of saints’ in the words of the Creed, without necessarily having much idea of all this precous concept could and should mean to us. The Lord really will be returning soon, ‘at an hour that we do not expect,’ and coming with thousands upon thousands of His holy ones! (Jude 1:14, cf Rev: 1:7, cf Luke 21:27)

The piece of music I have written here is both a cry to the Lord for His help in our troubles and battles on Earth, and a celebration of His soon-coming. It is a joy to share it with you now!

Because this is also a time when the Lord is sending a fresh anointing on many of the great old hymns, I could not resist adding extracts from a very familiar hymn: Martin Luther’s ‘Ein Fester Berg’ – ‘A mighty fortress is our God.’ Often looked on as the ‘Battle Song of the Reformation,’ in truth it was probably written more as a song of comfort: a reminder of the power of God to sustain in the face of a whole variety of spiritually oppressive situatuons.

Commentators suggest that Luther wrote the hymn during a time of intense trial following the outbreak of plague in Wittenberg, and a prolonged (and, humanly speaking, vain) battle to save his sickly daughter Elizabeth. Her death hit him very hard, at the very time when he was facing the loss not only of his reputation but also his very life by the stand he was taking for the Reformation. Like Paul, he was seeking to oversee numerous fledgling churches, whilst being himself under intense pressure from both worldly and demonic forces. Like Paul, too, he was also increasingly grieved by the entrenched and dogmatic positions that many in the new Churches were taking.

Although it is not a phrase that I have incorporated here, I love Luther’s line:  ‘One little word shall fell [the Prince of Darkness grim]’. May we have the faith and resolve to lift up the name of Jesus to dispel the fog and pierce whatever smoke, flames and spiritual giants we may be facing, and so counteract whatever lies the enemy may be seeking to beguile and dishearten us. Our enemy is indeed a liar and the sower of discord from the beginning: it is for us to dare to recognise this process when and wherever it is occurring and to affirm, as Luther did, our faith in Jesus, the only true ‘Ruler of the Spheres.’

Even though I can’t possibly do justice to such a mighty and magnificent topic, we hope you will be blessed by this piece. May the Lord make us truly aware of the very real workings of the Host of Heaven, and the better able to discern His presence from one day to the next, guiding, warning and inspiring. 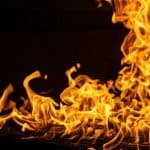