The team recently re-visited Lusenke, and had the great joy of baptising scores of the new believers in the nearby Nile and giving out Bibles. On arrival they were delighted to find that:

A queue forming to be baptised in the River Nile! 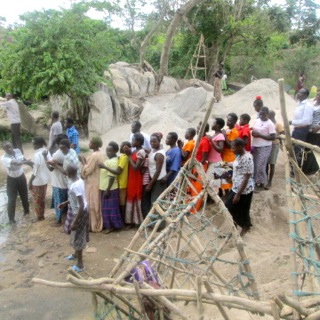 Let the little children come to Me

Among the new converts were over ninety children – but there is an acute shortage of Sunday School teachers in any of the churches to teach them! We have therefore arranged for a team from Evangelism Explosion to spend five days training forty prospective teachers from twenty churches. Please join us in prayer for this to be exceedingly effective. We are also prayerfully exploring ways of helping the host church to overcome their problem of being obliged to work in such a limited space!

Mission to Luguloire – 4-11th May: Light versus Darkness!

The mission we conducted eight years ago in this village on the other side of the Nile was one of the most fruitful that we have ever undertaken. This was almost entirely due to the fires that God lit in the hearts of Jane Waigaga and her fellow pastors in the area. There is such power and blessing that comes when God’s people work together in unity in joint evangelistic endeavours. Jane has become one of Mission Africa’s most effective team leaders.

Whenever there is a great move of God like this, it is all but inevitable that the enemy will retaliate by stirring up opposition. He often uses roots of jealousy as one of his primary tools. This has been happening, and this is a call to lift up the shield of faith against these destructive foes as we send a strong team to encourage the pastors in their bid to bring more of the light of God to this once dark region.

Pray for Pastor Jane Naigaga as she leads this team, and for Pastor Daniel Kato as he supports her.

Please join us in very specific prayer for all the points above, as well as for:

Let’s join together in thanking God in advance that many of these “mountains” and challenges will be cast down as we press in in prayer. May He do immeasurably more than we can hope or imagine, according to His power that is within us.