It’s always a pleasure to introduce the ministry of friends, and there is lots to enjoy in this blog by Tom Hawksley. It’s called Sternfield after a little village near Saxmundham in Suffolk where he spent some of his childhood in his grandfather’s house.

Many years ago we knew Tom Hawksley, when he had just finished studying at Oxford and was working sacrificially amongst the most vulnearable in the community. The Lord led him to Pakistan, and to marriage with Mojdeh, who is from Iran. It was through Tom that we ministered in Pakistan at a wide variety of venues in Karachi, Lahore and Jhelum, at everything from posh churches to extreme slums to the English, Urdu and Farsi Christians, paving the way for a visit by Richard Williamson and musicians, which saw many people dramatically saved in the cathedral.

Tom works now with Elam Ministries on behalf of the Iranian church, but he also publishes a blog we thought might be of wider interest to people not least a series of short biographical reflections on various ‘big name’ speakers such as the man who God has used so spectacularly in Nigeria, Reinhard Bonnke, Kathryn Kuhlman, Heidi Baker and others. There is plenty to ponder here! You can read an account of Reinhard Bonnke’s life and ministry on Tom Hawksley’s blog.

Why not start your exploration of his well-stocked blog with this article about Nick Vujicic.

You will undoubtedly have heard of heard of this man’s ministry, who Billy Graham reckons is well on his way to being the the most widely heard evangelist so far in the twenty first century, thanks not only to many massive stadium appearances but also to the Internet. By some estimates his preaching has reached one in ten of the whole world’s inhabitants.

The main difference between him and his predecessors is that he has neither arms nor legs! This is such an important story to be aware of – and to pray for so much more fruit to come from this man’s remarkable testimony. 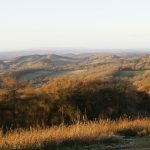