Let’s love and pray for Italy!

When you think of Italy, let’s get beyond thoughts of pasta, spaghetti sunshine and top flight football teams – not to mention superstition, organised crime and corruption and a struggling economy. Let’s think of how the Lord wants to raise up a people for His own possession who are EAGER to do what is good (Titus 2:14) – and to turn secular humanists and those who are dabbling in wrong things into fervent disciples of Jesus. May His be the name that is known and loved above all others in people’s hearts and lips. (That is a highly relevant point: far more people in Italy (37%) pray to the twentieth centry saint Padre Pio than they do to Jesus Himself. (10%!)

Some of you will remember my final visit to the theological library in Canterbury in December 2008, just a few days before we departed for Malvern, when I had asked the Lord if He had any particular books He wanted me to discover before leaving. That was when He showed me the wonderful riches of my great uncle’s retreat talks.

It was also the time when He introduced me to the life and times of Catherine of Siena. I was immediately impressed by the depth of this remarkable woman’s intense relationship with the Lord, and the huge effect she had on the politics of the nation, and the people of Tuscany as she travelled around preaching and the depth of friendships she enjoyed with the group who formed around her. Today, there are literally millions who hold this fourteenth century woman in the highest esteem. Along with Francis of Assisi, she is officially the co-patron saint not only of Italy, but of the whole of Europe.

“On the Tuscan Trail”

Back in 2009 Ros and I spent a precious week in Tuscany, where the germ of a novel was born: an action story set during the Second World War, in which a downed English pilot is taken in by courageous villagers and embarks on a whole series of adventures, in the course of which he falls in love with a local woman and begins a deeper quest for faith.

Those seeds are now developing into a fully fledged plant, and (when time and circumstances permit) I am seeking to write a novel that works on two entirely different levels: the action story on the one hand and a spiritual pilgrimage on the other. It is a great joy to weave in many fascinating real-life anecdotes and episodes from some of the great Italian saints. It was a real treat, therefore last week to have the opportunity to tour the region I am describing – in around and to the south of Siena in Tuscany – to gain deeper insight into the land and its people. (Tuscany, incidentally, was one of the few regions which did not return an absolute majority for the Fascist Party before the war. It has traditionally been staunchly Communist and left-leaning). I booked into three highly economic hotels, all of which had, until recently, been monasteries.

The pictures below are of Catherine’s santuary, plus a view from my room.

The first establishment I had booked into turned out to be right next door to Catherine’s own house. My room actually looked straight down into the very place where she had grown up: originally a dyer’s house but now a sanctuary, where the Lord spoke powerfully to me on a day trip to Siena four years ago.

On my first night in Siena, there was a storm of exceptional strength, with something like three inches of rain falling in just a few hours. This ensured that hotel guests were as it were confined to quarters the following morning. After breakfast, I sat down at the lovely, but rarely used, grand piano in the lounge, and began playing in the Spirit. The music resounded through the hotel, and drew Italians, Americans, Colombians and others. I played ‘musical portraits’ for people, and from there, it was easy to go on to share the Lord with them and, in some cases, to bring individual words from Him. It was such a thrill to watch Him open door after door to witness so rapidly.

The pictures below show the room where I played in Siena, and the Steinway in the Renaissance hotel,  which was already in place during the Second World War.

A Hotel with a History

Throughout my time in Siena I had a great sense of being led to the right books, people and places to round out my novel.

One of my objectives was to meet the present owner of a particular hotel that was originally a Renaissance palace, but which was owned during the Second World War by his relative: a courageous woman who sheltered Jews and others, whilst at the same time being obliged to host senior members of the Nazi establishment!

I could perfectly well have written an anonymous account and placed it in a fictional hotel, but it is going to be all the richer now that I have permission to give the location its real name.

The whole book benefits from this subtle interweaving of real historical events with the fictional storyline. It is a very long way from being completed, but it is a delightful project to be involved in, and and I was thrilled to have the best part of a whole week to devote to it. I loved every minute of it! As you can imagine, I spent the entire week reaching either for my notepad or my camera!

Other Facts that match Fiction

The Italian Campaign, which forms the backcloth for the novel is often neglected or forgotten, but it was a bitterly fought event, with enormous loss of life on all sides. One of the key locations is a ‘safe house’ where Allied servicemen on the run are able to take refuge. Having written numerous scenes involving this imaginary location, I came across a real-life precedent for it. Iris Ortigo’ s War in Val d’Orcia is a quite remarkable account of a landholding couple who cared sacrificially for large numbers of people, right under the noses of the authorities. It is a brilliant and powerful account of a key period in Italy’s turbulent development.

Among other highlights were two visits to this magnificent monastery. It is saturated in prayer – a truly thin place, where heaven draws close. I enjoyed talking to one of the monks who was able to tell me about the role of the monastery during the war. It was a strange feeling to be on a quest to find a place that doesn’t exist – namely: the location for an imaginary safe house (albeit one based on solid fact) – but by God’s grace I think I found it!

After time in Cortona, Foligno and Lazio, I headed across to Massa Marittima. This small city is a mediaeval Italian gem, but a truly hard place spiritually. Neither of the two churches in the town can by any stretch of the imagination be said to be vibrantly alive.

I spent a day there inputting into the life of a dear woman who has returned to Massa after living for thirty years in London. She leads a prayer group that are seeking to get things moving, but very much in the face of extreme resistance and challenges, the church leaders declaring vociferously that lay people should ‘remain in their place!’

One of the delights of our day together was a visit to a large wine producing farm owned by members of her family. She gathered the staff together in the courtyard and asked me to pray for them all which, of course, was a great opportunity. I also had the chance to pray with another member of her prayer group at their place of work, which was also very special.

The Spiritual State of Italy

A huge percentage in this lovely nation have a decidedly ‘couldn’t care less atttitude’ to the claims of the Lord Jesus on their lives. It is so much my heart’s desire that this increasingly secular nation may be renewed in a living faith. Many of the trends I described in Malvern Mashal 16 about Italy hold entirely true. Rather as in Majorca, priests are aging, churches emptying and monasteries shutting their doors or, as we have seen, turning into hotels. All this is in radical contrast to Brazil, where the impact of charismatic renewal is on an entirely different scale.

For rank and file Italians, life in these times of austerity is hard. It seems to be increasingly normal for people and companies to withhold payment for services rendered for up to nine months or more, causing immense hardship in the process.

Many Italians are deeply pessimistic about the extent of the corruption in the land. They no longer have any confidence in the ability or desire of their leaders to do anything about it; they feel very strongly that their leaders are in it for what they can get out of it for themselves. At the same time, many feel that Europe has abandoned their nation and left them to handle the large influx of immigrants from Somalia and elsewhere on their own.

Formula 1 on the street

Italian drivers are legendary! There are many seriously hurt, depressed and angry people about – and this is reflected in decreased driving skills.

No sooner had I driven away from Pisa, than my portable Satnav most unhelpfully conked out. By the Lord’s mercy nothing was added to the substantial collection of bumps and scrapes the hire car already bore – and at least this prepared the way for me to have surprisingly rich encounters with the many people I met when I had to stop to ask the way.My favourite story is of seeing a man peeing in the street, Italian style, as I entered one city. When I approached him he kindly drove ahead to show me the way!

Travelling Tips for living on a Budget

I don’t know what I would have done if I hadn’t taken a travelling kettle as my companion! Most days I made do with instant meals I had brought with me, to which I simply added hot water. What the military call MREs – Meals Ready to Eat! By no means ultra-delicious, but all part of being on pilgrimage.

All in all, it was a great privilege to be free from normal responsibilities to focus deeply on the Lord in prayer on the one hand, and on my project on the other.

On my final morning, the Lord gave me a lovely word about Ros from the Book of Sirach. which is in the Italian Bible:

A loyal wife brings joy to her husband,
and he will finish his years in peace.
A good wife is a generous gift
bestowed upon him who fears the Lord.
Whether rich or poor, his heart is content,
a smile ever on his face.
(26:1-3)

The Lord also spoke to me from Psalm 84 about the whole concept of pilgrimage, which is very much what I felt I was on. Driving back to Pisa Airport, I was remembering the beautiful choral version of Psalm 84 Dad recorded at Southwell Minster over forty years ago. Suddenly I was hearing a new song in my spirit and had to stop at a service station to write it down.

To complete the serenade, a choir from an English prep school sang a lovely version of Psalm 23 for us all on board the flight home. May His goodness be with us all the way – and may the Word of God be raised up in new ways in Italy, and new waves of His Spirit be released. 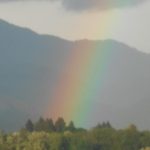 Prayer for Italy – Soil and Soul 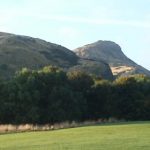