We are so grateful to those of you who picked up on our need to find a place of deep soothing peace. A dear friend lent us her apartment on the outer fringe of Palma’s beautiful bay; it simply could not have been a more perfect place for us to go.

For both of us to have the chance to have uninterrupted time with each other and to be able to pursue topics close to our hearts, in our own time with no competing distractions was pure manna to the soul – as refreshing to us as other people might find painting watercolours (Winston Churchill loved doing that – in between building walls, which was his other favourite way of unwinding)! 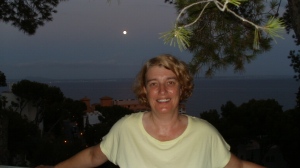 For one thing the Lord showed me a new pattern sharing certain Scriptures for in an imaginative and meditative way. For another I was able to make some progress on a novel I have drawn up notes for and that is set in Italy during the Second World War.

It’s a long term but utterly fulfilling project to be immersed in, and one that will hopefully bless in many ways when it is finally completed. (No predictions as to how many years of very much part time scribbling that will take – but it was a perfect place to ‘lose myself’ in the scenes I was creating)! I even found a particular place to describe at the ‘finca’ we had a BBQ in after church up in the hills. It won’t be hard to substitute Mallorca for Tuscany for that particular scene!

The weather became highly volatile at one point, with over nine thousand lightning strikes hitting the island. Blissfully unaware that water is a good conductor of electricity(!)  I enjoyed a wonderful late night swim in the storm around my favourite headland, – a thrilling experience,  marvelling at the intense beauty of the lightning as it exploded over the sea – not at all just a simple lightning bolt but a full blown illuminating of the sky that makes a firework display look piffling by contrast.

Robert took this photo at dawn from the bus stop just as he was leaving.

As Rosalind wrote to some friends, “Watching the early morning sun rise over the bay, and then the moonlight spreading over the water each evening (and having a final swim by moonlight) was very beautiful, and very romantic!” 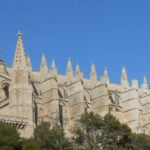 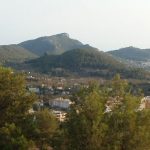 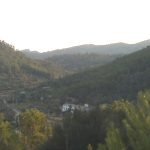