The Significance of the East Gate

On my final morning in Jerusalem, we walked along the city walls past the East Gate, which, as Ezekiel had prophesied would happen, (Ezek. 44:2) was blocked up in the 16th century by an Ottoman Sultan. Knowing that no Jew would ever step over a grave, a cemetery was also established there to hinder the Messiah’s return. The Lord will not be so easily deterred! It is prophesied that He will return to the Mount of Olives and, together with His chosen saints, and walk down through the Kidron valley through the East Gate and into the Temple area. 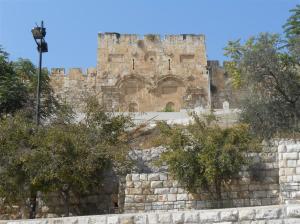 The ‘Golden Gate’ is the oldest of the current gates in Jerusalem’s Old City Walls. According to Jewish tradition, the Shekhinah (Divine Presence) used to appear through this gate, and will do so again when Messiah comes (Ezekiel 44:1–3). Jews used to pray for mercy at the former gate at this location, and hence its name Sha’ar HaRachamim: the Gate of Mercy. In Arabic it is known as the Gate of Eternal Life, but it was known in biblical times as the Beautiful Gate. (Acts 3:2) It is the gate through which Jesus passed on Palm Sunday.

The present gate dates from the early sixth century, and is located in the middle of the eastern side of the Temple Mount. Click here to read what Dr David Reagan has come to understand about the significance of this East Gate. (Round about 2 minutes 15)

I found it a great privilege to visit The Garden of Gethsemane. The name derives from a word which simply means olive oil press. I had seen a replica olive oil press at Nazareth Village – it is quite a sobering thought how the Lord uses extreme pressure and “pressing” so often produces the best anointing oil!

Leaving my friends amongst the ancient olive trees I made my way up a long series of steps, enormously aware that I was walking along the route by which Jesus regularly went to and fro from Bethany to Jerusalem during the final days of his public ministry. He could so easily have escaped back to the relative safety of Mary and Martha’s house on the fateful night when He knew that Judas was going to betray him, had He not known that it was His destiny to remain in Gethsemane and face His agony.

On my way down from the Mount of Olives I took a short detour to the Dominus Flevit Church, (literally “the Lord wept”). In Luke’s account, immediately before the cleansing of the Temple, it was here that Jesus looked out over the city and wept.

How I wish today that you of all people would understand the way to peace. But now it is too late, and peace is hidden from your eyes.  Before long your enemies will build ramparts against your walls and encircle you and close in on you from every side. They will crush you into the ground, and your children with you. Your enemies will not leave a single stone in place, because you did not recognize it when God visited you. (Luke 19:41-44)

God does not despair over the state of the world – but He does weep over it. May we experience more of the Lord’s heart, and be in the ‘mode’; that He is in: whether of rejoicing or mourning.