Taking offence or giving thanks?

Be careful in His presence and hearken unto His voice (Ex. 23:21 Darby)

Back in the day when rail travel was in its infancy people’s luggage was stored in a separate Guard’s Van and taken out and placed on the platform in alphabetical order. Mr Appleby would find his trunk under A, Mr Brown his under B and so on, but when a clergyman travelling up from Wales for the first time he was unfamiliar with the system and asked a porter where he would find his. When the porter asked him his name he replied, “Llewellyn”. He was considerably taken aback when the porter said to him “Go to L, sir!”

There was, of course, a perfectly innocent explanation, but many of us are only too good at taking things the wrong way!

God wants our senses to be trained by constant careful use. (Heb. 5:14) He knows how easy it is for them instead to be strained! Since all of us are prone to fall into the devil’s trap at some point or other and to take offence, it is important to identify both the tensions that you are currently facing that are upsetting and even potentially crippling you – but also the ‘landmines’ that have longed lurked in our subconscious, just waiting for certain events to occur that might trigger them.

It is so easy to take offence at someone (even at the Lord Himself) because you misunderstood the implications of what was being said or done. It is so easy to jump to conclusions and to take things the wrong way! May the Lord give us faith, trust and discernment to recognise when something we were inclined to look on as unpleasant may actually have not only an entirely innocent explanation, but even a positive one.

In Elizabeth Prentiss’s much loved classic, ‘Stepping Heavenwards,’ Katie, the young wife whose spiritual pilgrimage provides the backcloth to the book, understandably becomes deeply frustrated by the ‘awkwardness’ of her antisocial father-in-law, who darts swiftly back to his room after meals rather than staying for family fellowship or festivities. With the best will in the world she cannot refraining from judging him heavily for this. After his death, however, she discovers that he disappeared each evening in order to pray for all the family!

It is so easy to jump to conclusions! Can you think of times when you have taken offence at something someone said or did because you misunderstood the implications of what was really being said? And then perhaps discovered that something you found objectionable at the time may have had an entirely innocent, or indeed a helpful explanation.

It is especially painful and regrettable when issues that give rise to offence occur between friends. How much better to resolve ahead not to huff or to put friendships unnecessarily on the line. Our love for one another is a jewel in God’s kingdom – and like all jewels, it benefits from being vigorously polished. Sooner or later things happen that put every friendship to the test.

What is your instinctive reaction? To put up walls between you? To claim incompatibility? To confront the other person with their ‘differences,’ and defend your own position? Or do you honour your friend and your friendship, and make every effort to adjust and adapt yourself to the other?

Pray for the work of God in your friendships, and pray to withstand anything that might come against them and risk severing them. Is there anyone you are in danger of taking for granted? Anything you need to do to put things right? Ask the Lord to show you ways you can go deeper in your relationships.

It is not only in our earthly relationships that we need to guard against withdrawal and offence: we can ‘feel miffed’ and take umbrage against the Lord too. Bless Joseph, who although he did set about things in a strange way, did go to considerable lengths to reassure his brothers that although, “You intended to harm me, God intended it for good to accomplish what is now being done: the saving of many lives.” (Gen. 50:20-21)

Long before Merlin Carothers wrote his inspiring and challenging classics on praising God and giving thanks in every situation, Joseph appears to have learnt much the same lesson. Merlin reminds us that when we are prepared to give thanks even when bad things happen, we are acknowledging the sovereignty of God in our lives, and affirming our trust that He is able to work everything out. That is surely a powerful way to apply Jesus’ words, “Blessed is the one who does not take offence at Me.” (Matt. 11:16)

Have you noticed how often chooses to work in ways that instinctively ‘offend’ our narrow way of thinking? He seems to delight in busing people, and employing strategies that the world would consider to be decidedly odd. He does so in order to confound the so-called wise and mighty! (1 Cor. 1:27)

There is a special warning here for those who have been used by the Lord in the past not to allow themselves to feel ‘offended’ when the new generation take on board an entirely new set of practices. All too often – and quite unnecessarily – it is the opposition that comes from these ‘big names from the past’ that discourages the next generation, and allows satan to plant deadly seeds of bitterness and division.

May we be swift to recognise the danger, and not to harden our hearts and take offence when the Lord God chooses not to work in the same way, or even through the same people as we had hoped and expected Him to do.

I heard a tragic story told of an American student who had expected his father to buy him a car when he graduated – not least because many of the parents of his fellow students were doing precisely that for their own offspring. The young man had gone so far as to choose his dream car and told his parents precisely which one he wanted. Imagine his chagrin when, on the day of graduation, his father handed him not the keys to a brand new car but instead a Bible.

Deeply offended, and feeling as though he had asked for an egg but had received instead a stone, (and not in the least perceiving the value the word of God could have brought to his soul) he became so incensed that he stormed off in a huff and promptly cut off all contact with his father from that moment on.

Years later, the son returned to put his affairs in order, following the death of his dad – and that was when he came across that Bible sitting on a shelf. Flicking it open, he found an envelope inside it with a cashier’s cheque dated with the day of his graduation and made out for the exact sum needed to purchase the car he had coveted.

This is such a very sad story – but not so far removed from the blessings we can so easily miss out when we allow our own desires to choke us. Because the father’s gift did not come in the way his son had expected, the boy rejected it. Just so did many in Israel reject Jesus because he did not fulfil their idea of what the Messiah ought to look like. Worse, He did things they expected Him not to do – including, of all things, healing people on the one day when everybody was around: the Sabbath.

The Pharisees “missed” God because they failed to recognise the promised Messiah in the form of this itinerant preacher from a humble background (cf Luke 19:44). The thought of their Saviour coming in such lowly guise was far too degrading for them to contemplate. Why, he wasn’t even one of their own! And whoever heard of a prophet coming from Galilee? Bethlehem yes, but Galilee? If only they had known about the census that had taken Mary and Joseph to Bethlehem!

Too late the son in our story found out what his father had done for him. Not only had he missed out himself, but he caused much lasting grief to others simply because he hadn’t been prepared to trust his father and to open the Bible.

So far as we know, this wise and generous father did not rush after his son to plead with him and say, “Just open the Bible, son – you won’t be disappointed!” Just like God the Father with us, he had given his son the free will to do what he chose with the gift that he was giving. God has many things in store for us when He calls us to some particular project or lifestyle – but He doesn’t dangle and display these before our eyes as some sort of bribe: He wants us to embrace them in faith, love and obedience.

Let me ask you again: can you think of times when you have responded untrustingly and ungratefully to the Lord because things do not appear to be working out well? How has this left your heart? Inclined to feel frustrated . . . impatient . . . complaining . . . unbelieving.

May the Lord show us who we are failing to appreciate and what we are failing to see as the result of our pride and prejudices that are so hard to counter. May He keep us from getting hold of the wrong end of the stick about things, and making a great song and dance about them!

Keep us from doubting, disusing or abusing the gifts You have lined up for us, Lord. Grant us the sensitivity as well as the humility to recognise when we are hosting offence and resentment in our hearts – or prejudices that blind our eyes and seal our ears. May we be open to the gentle word of friends who spot the bitterness of ‘blight’ at work in our life, damaging Your work within us.

Come and be still before the Lord, and let Him speak to you about these things. May He minister peace to your soul. We hope and pray this piece will bless you.

We also thought you might find it relevant to listen to this introductory talk again in the series: Stepping out and Finishing well: (i) The Constancy of God in the midst of Uncertainty

Amongst many worthwhile matters, you will find a recommendation to John Bevere’s The Bait of Satan – a book that speaks powerfully into those many situations where it is possible for us to needlessly take offence, and so to lose much momentum for the Lord. 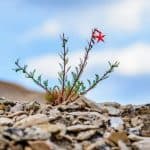 Praying for something beautiful to emerge from the mess: A suggestion for when we vote today