On the Russian Front

I have already hinted at how strong Russian propaganda has been.

President Putin is currently extremely active not only in projecting military power but in forging stronger relationships with various countries including Egypt, which was, of course, Russia’s strongest ally amongst the Arab nations back in the 1950’s.

Meanwhile, ISIL’s acts of extreme violence have appeared to have galvinised the ‘giants’ of Egypt and Jordan to oppose them more actively, rather as Pearl Harbour once woke goaded the United States into action.

Putin has also been reaching out to Hungary, a country where the autocratic leadership, not always with the support of the people, are definitely developing strong Russia-leaning tendencies. President Orbán appears comfortable that his country is becoming all but completely dependent on Russia for its energy supplies. Despite being in NATO, he has voiced considerable contempt for the liberal values of western Europe, and admires Putin’s “strong” stance, holding him up as a leader to admire and imitate.

Putin’s strategic includes attempts to influence nations not firmly in the EU pocket, including Serbia and Bosnia, and in particular Greece. Yet again it is strange that the Balkans are involved in  critiual flashpoint moments. Vladimir Putin building alliances around the world.

Keep Angela Merkel in mind as she continues her frontline shuttle diplomacy. She looks almost as tired as Petro Prooshenko himself, She has just returned from a visit to Hungary, (a country she does not normally visit on account of its autocratic Prime Minister) to try bolster relationships. Her visit does not appear to have improved relationships. Many Hungarians are unhappy at the pro-Russian stance their leadership are taking; Hungary itself has little reason to love Russia. Pray for Hungary, a country where, historically an unusually high number of people suffer from depression.

Meanwhile, Russia is massively beefing up its warlike propaganda, laying considerable emphasis on the fact that they are developing a nuclear capacity within their armed forces – and this ata time when the West has massively scaled down every aspect of its defence forces. Much of this may be being played out to impress the domestic audience, which has been taught to believe America to be hostile to Russia, and encroaching on its territory by trying to “poach” Ukraine. But the attempt to scare the West  is ery real too – and what may be designed as brinkmanship can easily escalate and acquire a momentum of its own, spiralling out of control.

Western leaders have had no experience of handling people as complicated as President Putin. As this article suggests, they simply did not realise what they would trigger by pushing Ukraine to join the NATO camp.

The West cannot afford to get too directly involved in what is fundamentally a civil war in Ukraine – a country where decidedly unpleasant nationalist forces are at work, as Ross Kempe admirably reported when he headed into the heart of the battle zone to see for himself the dangerous spirit that lie behind the rising tide of nationalism that impels the Azov Brigade. http://features.sky.com/ross-kemp-ukraine/

In other words, we are not dealing here with a nation of saints! Pray for many to find the Lord a very present help in the midst of trouble. 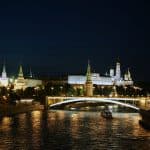