Insights into the reasons behind events

At one point during the reign of David, the land endured famine for three successive years. A less spiritual king would have sent his biggest wagons rolling down to Egypt to stock up on grain. He might even have gone to war to procure supplies.

On an earlier occasion, David had shown himself quick to discern the hidden hand of Joab behind a request that had been presented to him. (2 Sam 14:9) Now, because the Lord had trained Him in his ways, David took time to seek the Lord, and recognised this famine as being something more than a problem of the moment, so he sought the Lord about it. What the Lord said must have come as quite a surprise. He showed him that it was the fruit of Saul breaking a promise made centuries ago concerning the Gibeonites. This was a tribe that was not a part of Israel but who were survivors of the Amorites whom the Israelites had sworn to spare. In his zeal for Israel and Judah, however, Saul had sought to annihilate them.

David took the judgement of God to heart, and summoned the Gibeonites to ask what he could do to atone for this. Having fulfilled their (decidedly grisly!) requirements, the chronicler relates that the Lord was again prepared ‘to answer prayer on behalf of the land’ (See 2 Samuel 21:1-14) Coverdale poignantly translates this last verse by declaring that God was again ‘at one with the land’: the true meaning of at-one-ment!

How important it is to ask the Lord for His view on things! This passage is a powerful incentive to look beyond the news feed and to be willing to ask the Lord what He has to show us in, through and beyond the endless succession of daily headlines. It would not have been sufficient for David to have responded as we so often do when faced by similarly concerning things by praying, “O Lord, there’s a problem: please send a fire engine and put the fire out!” This is rather a call to look beyond the immediate circumstances and find out what forces are really at work in them.

Having seen the underlying causes from the Lord’s perspective, we then need to address the areas where we have been wrong. Consider, for instance, the vast number of promises and treaties the former Soviet Union systematically broke, but which it has never formally faced. What effect will this have had upon the Russian soul and psyche, pre-conditioning them to be influenced by the streams of propaganda the present administration continually directs their way?

See: Just one incident can lead to serious consequences and The effect of sacionts and propaganda

Those of us who grew up during the Cold War learnt to recognise the ways by which the Soviet regime made full use of a constant string of propaganda weapons, false charges and all types of allegation to pick on and punish real or supposed opponents of the official communist regime. Falsehood, of whatever kind, always risks opening the door to the enemy:

“[The devil] was a murderer from the beginning, not holding to the truth, for there is no truth in him. When he lies, he speaks his native language, for he is a liar and the father of lies. Though you do not know Him, I know Him. If I said I did not, I would be a liar like you, but I do know Him and obey His Word.” (John 8:44,55)

And are we in the West any better? Fact Checker has claimed that the present occupier of the White House has released more than three thousand ‘distortions’ within the first two years of his time in office.*

There is a great deal we should be concerned about here with regard to the effect that this is having on people’s ability to discern where truth lies. One might well ask what this has to say about President Trump, when his lawyer, Rudy Giuliani, brazenly claims that “Truth isn’t truth” – meaning that it is whatever the President chooses it to mean. He does not know better than God, whose word is always truth and which always prevails.

What is truth? said jesting Pilate; and would not stay for an answer. (Francis Bacon Essays: Of Truth). Yet Jesus Himself, the very embodiment of truth, was standing right there in front of him. In considering truth from a biblical standpoint, we are speaking not of a viewpoint but of a Person: of Jesus Himself, who is the Way, the Truth and the Life. (John 14:6) That is why we are to set ourselves with all our heart to be lovers of truth.

I have shared here mainly about there often being spiritual rather than purely natural reasons for a setback; the reverse is equally true – that great blessings often accompany many people and projects because of the goodness, kindness and righteousness that have been shown behind the scenes. Corrie Ten Boom asked the Lord once why she was always so blessed in the hospitality she received as she toured the world. The Lord revealed to her that it was because of her mother, who had kept a soup kitchen open during the Great Depression. Corrie was effectively ‘inheriting’ the fruit of her mother’s sacrificial hospitality. (See Deut. 5:9-10. I would particularly recommend in this respect the chapter on the Law of the Generations in Catherine Marshall’s book Something More. (Hodder)

Have you ever sensed that you are ‘inheriting’ some family blessing – or alternatively some troubling issue? What effect did this have on you? What action have you taken either to be cut off from it or, if the fruit be good, to develop in godly ways?

Many of us need to bring negative family tendencies and characteristics to the Lord so that He can change and redeem them, and then those that are good too, so that He is glorified in every part of our lives. This can be important on so many levels!

PS Just in case you feel like taking this line of inquiry further, here are 41 verses in Scripture about enquiring of God! 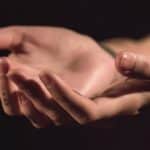