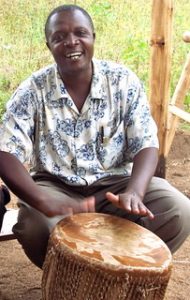 Last month the team led by Richard Ssendi made a follow visit to Bwaniha, the village in Eastern Uganda where we held a mission in December. As their vehicle pulled into the village, their hearts were immensely warmed by the crowd who had gathered to await their arrival.

They were thrilled to hear one report after another of how the local pastors had adopted the system of preaching door to door which we had trained them in.

Ken Oudo, a false teacher who made himself rich by practicing witchcraft, is now following the Lord. He handed over all his witchcraft items whilst the team were there, along with the items that he had used for traditional rituals at his “church” (which is unfortunately is the biggest in the area). He was baptized at the same time.

And now we are hearing of police cells being emptied and a community transformed!

One after another local community leaders and shop keepers spoke of how our visit had brought about a great transformation in the area. Everyone has notice that the rate of criminality has sharply declined, along with immorality generally. A man who used to regularly attack fellow fishermen out of a spirit of envy and jealousy has now been saved and forgiven by the community. Praise God for this Kingdom transformation!

A group of young men who took drugs and smoked marijuana have stopped doing so, and were amongst those whom the team baptized. A 63 year-old policeman declared that it was the first Christmas in his community that no one had been arrested. To their astonishment the police cells have never been empty before at Christmas!

Despite differences in their various denominations, it is lovely to report that a new sense of unity has developed among the pastors.

The first ever baptism in the village 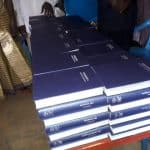 The team had the joy of baptizing 84 new believers plus 22 existing ones. This was the first time that baptisms have been held in the area. This was followed by the team leading them all in communion – again, a new experience for the local Christians. Much to their appreciation, this was followed by distributing 150 Bibles. Films were shown, with more than 200 watching them each evening. As a result, 26 more people gave their lives to Jesus during this brief follow up visit. 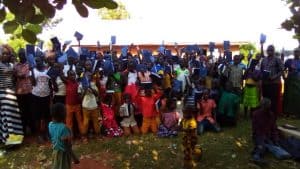 Raising their new Bibles for the camera

The Prison Ministry is expanding!

As we hinted in the last edition, the number of prisons to which the team is able to go has now been increased from ten to sixteen. May even more souls be reached! There is a real need for the Prison Ministry to have a vehicle to facilitate this growing ministry. Your prayers for God to provide the funds for this would much welcomed.

Thank you so very, very much for all your prayers, encouragement and the hugely appreciated support. These are – that is you are – the means by which God makes it possible for us to continue this precious work to people in parts of Africa that the world would consider remote, but which are very near in God’s sight.

With our love, Terry Charlton, Steve Trint and Daniel Kato on behalf of the Evangelistic Team